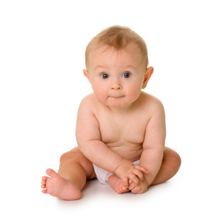 Your baby will give you the most important information—how he or she likes to be treated, talked to, held, and comforted. This section addresses the most common questions about a baby’s development during the first year of their life. We have gathered most recent information from American Academy of Pediatrics, Office of Child Development, CDC and Triple P. Cornerstone will also provide a list of fun activities that you and your baby can do together.

Babies go through many changes during their first 12 months, and no two babies develop at the same pace. One baby may reach a milestone early, another later. Babies born prematurely tend to reach milestones a little later. It is not unnatural for a baby to decrease his focus on one skill to work on another, this theory is called resource allocation.

Babies develop so rapidly in the first year by the time she is 1 year old she will be a completely different baby then when you brought her home so we have divided this Baby section into 4 sub sections, 1 month, 2-3 months, 4-7 months and 8-12 months.

It may seem that she does nothing but eat, sleep, cry, and fill her diapers. By the end of the first month, she’ll be more alert and responsive. She’ll begin moving her body more smoothly and with more coordination—especially in getting her hand to her mouth. You’ll notice that she listens when you speak, watches you as you hold her, and may move her own body to respond to you or to get your attention.

Movement/Physical Development: Visual and Hearing Development: Development Health Watch:
If, during the second, third, or fourth weeks of your baby’s life, she shows any of the following signs of developmental delay, notify your pediatrician.

By the time your baby is three months of age, she will have made a dramatic transformation from a totally dependent newborn to an active and responsive baby. She’ll lose many of her newborn reflexes while acquiring more voluntary control of her body. You’ll find her spending hours inspecting her hands and watching their movements.

Although each baby develops in her own individual way and at her own rate, failure to reach certain milestones may signal medical or developmental problems requiring special attention. If you notice any of the following warning signs in your infant at this age, discuss them with your pediatrician.

From age four to seven months, the most important changes take place within your child. This is the period when he’ll learn to coordinate his emerging perceptive abilities (the use of senses like vision, touch, and hearing) and his increasing motor abilities to develop skills like grasping, rolling over, sitting up, and possibly even crawling.

Because each baby develops in his own particular manner, it’s impossible to tell exactly when or how your child will perfect a given skill. The developmental milestones will give you a general idea of the changes you can expect, but don’t be alarmed if your own baby’s development takes a slightly different course. Alert your pediatrician, however, if your baby displays any of the following signs of possible developmental delay for this age range.

From eight to twelve months of age, your baby will become increasingly mobile, a development that will thrill and challenge both of you. Being able to move from place to place will give your child a wonderful sense of power and control—her first real taste of physical independence.

Each baby develops in his own manner, so it’s impossible to tell exactly when your baby will perfect a given skill. Although the developmental milestones listed will give you a general idea of the changes you can expect as your child gets older, don’t be alarmed if his development takes a slightly different course. Alert your pediatrician if your baby displays any of the following signs of possible developmental delay in the eight-to twelve-month age range.

Our Cornerstone Therapists are some of the most experienced and talented therapists, they are so engaged and attentive to babies, toddlers and preschoolers needs as well as the parents and caregivers needs. They really know how to support the entire family by providing unique strategies to promote development and encourage positive behaviors.  Here is a list of some of the activities our therapists participate and encourage families to engage with their baby.

Motor Games and Activities Kris Madson our Preemie and baby expert loves to provide families with sensory supports, she works with families to determine what their baby’s needs are. Together they work through strategies that work best for baby and parents needs.